The Lovable Mutt That Made America Proud 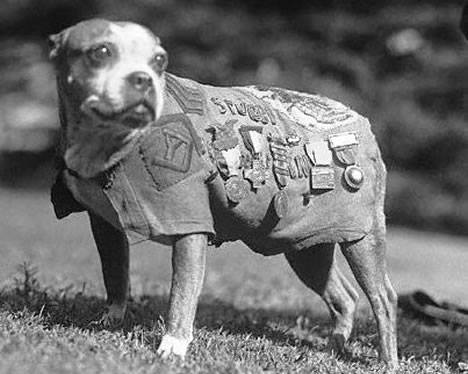 Heroes come in many varieties. There are Super Heroes, everyday heroes, unlikely heroes and yes, even four-legged heroes. This story is from the latter category.

A while back, I told you the tale of the real-life pooch who popularized the famous saying “a dog is man’s best friend.” (Click here to read it.) Turns out a dog is a good comrade to have at your side in the thick of battle, too.

Since April 6, 2017 will mark the centennial of America’s entry into World War I, this is the perfect time to introduce you to Sgt. Stubby, the most decorated dog in that conflict. 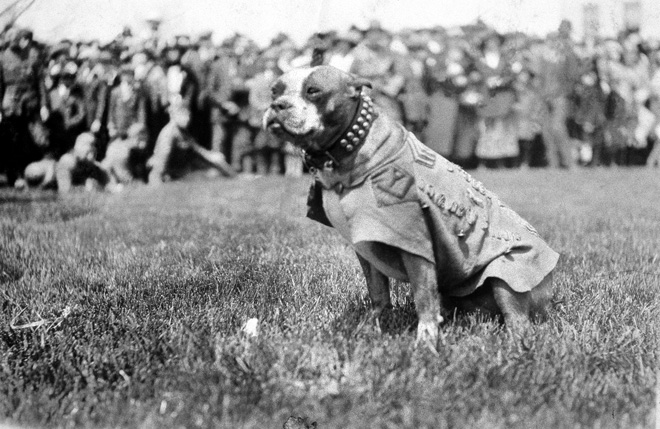 It all started innocently enough in the summer of 1917. Soldiers from the 102nd Infantry were training on the Yale University campus when a stray dog wandered up. He was a brindle patterned pup about one year-old, part Boston terrier, part Bull Dog, Part Heaven Only Knew What Else. Just an all-American mutt that took a shine to the unit and hung around to watch it drill. Corporal Robert Conroy took a shine to the dog, too, and more or less adopted him. A strong bond instantly developed between them. 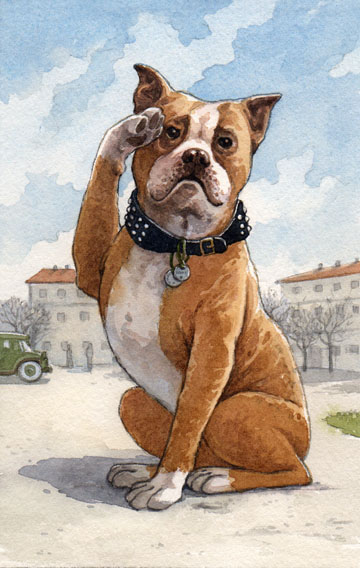 The dog was intelligent and quickly became attached to the men of the 102nd. He seemed to enjoy being taught new tricks – including lifting his right paw to his temple in a military salute. (Which later turned out to be a very important trick.)

Since the dog obviously was now with the unit for the duration, he needed a name. Someone suggested Stubby. It worked, so Stubby he was.

Orders eventually came for the 102nd to ship out to France. Soldiers were severely restricted on what they could bring with them; dogs weren’t on the list. But there was no way Stubby would stay behind. So Conroy stashed Stubby under his overcoat and smuggled him aboard.

A few days out to sea, Conroy’s commander discovered the dog. He was furious … and he wasn’t going to lose his commission over some stray mutt. He was about to seize the dog when Stubby drew himself to attention and smartly saluted. Who could resist a gesture like that? Stubby stayed with the Doughboys. 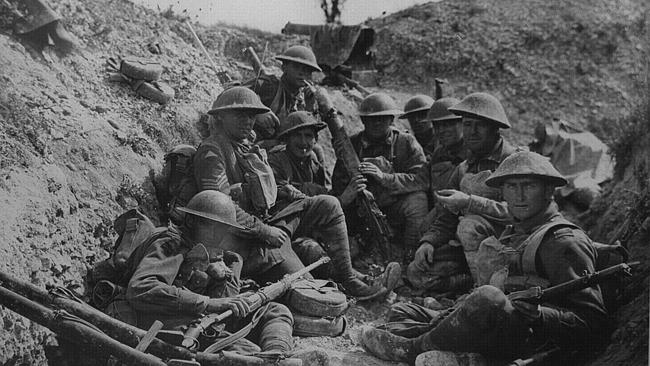 Once in France, the 102nd joined the 26th “Yankee” Division and went straight into the trenches, commencing eight months of serious combat.

That was when the soldiers discovered the sharp little dog was more than a mere pet; he was a battlefield asset. Stubby instinctively understood lives were at risk and he defended the men with the same ferocity of your family dog defending your house.

Stubby fought in an amazing 17 battles. His baptism of fire came in early 1918 when he was under 24 hour artillery bombardment for a full month. His “Let’s get ‘em!” aggressiveness and relentless cheerfulness even in the worst conditions boosted morale. 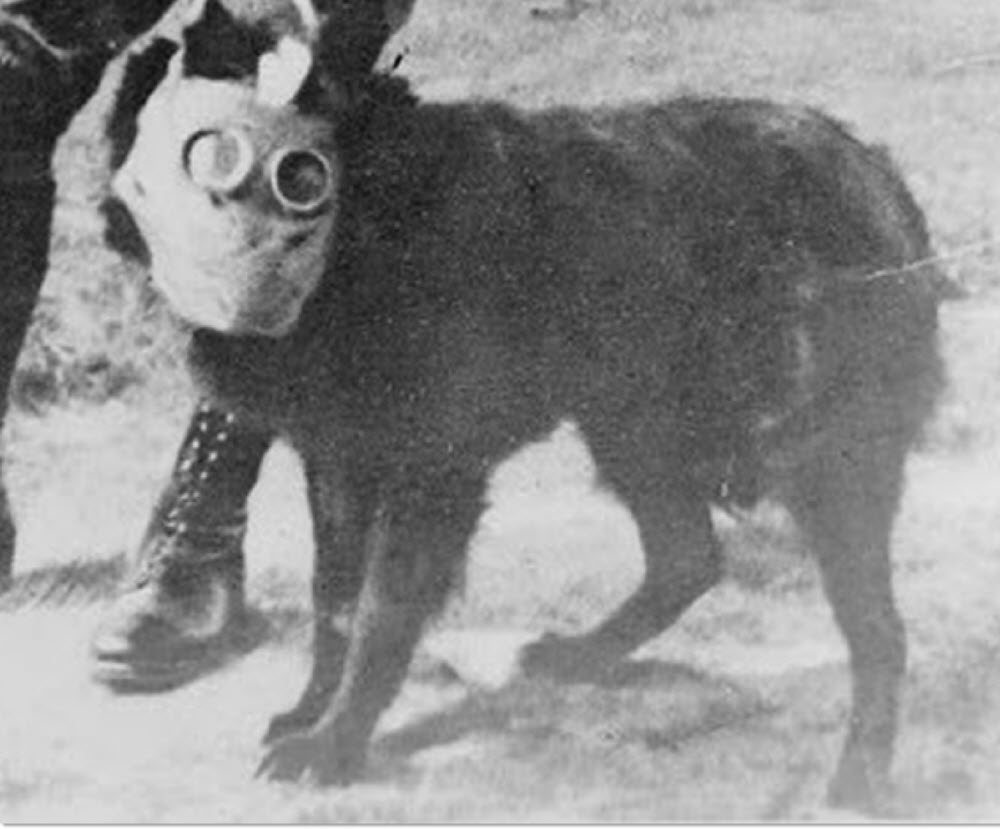 Stubby’s sharp nose and keen hearing detected incoming artillery shells and poison gas attacks before they struck. Injured in the leg by shrapnel, he was sent to a hospital in the rear where he cheered wounded warriors while he recovered.

Then it was back to the front, where his comrades had a special gas mask made just for him.

Stubby helped locate and rescue injured soldiers. In the Argonne, he even captured a German spy by biting the man in the leg or bottom (accounts differ) and holding him until the Doughboys arrived. 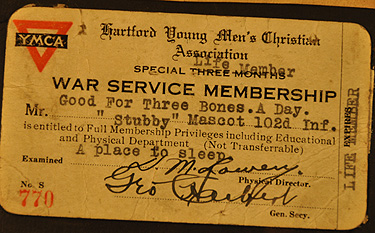 That act of valor prompted the 102nd’s commanding general to nominate Stubby for the actual rank of sergeant. There’s no indication the nomination was ever acted upon, but that didn’t matter. He was known as Sgt. Stubby for the rest of his life. (He later received his own YMCA veteran’s card entitling him to “three bones a day and a place to sleep.”)

War correspondents couldn’t get enough of the dog’s exploits, which were widely reported in newspapers back home. Sgt. Stubby was rapidly becoming a celebrity on both sides of the Atlantic.

The women of Chateau-Thierrey made him a special chamois coat, which came in handy for displaying all his medals for heroism. 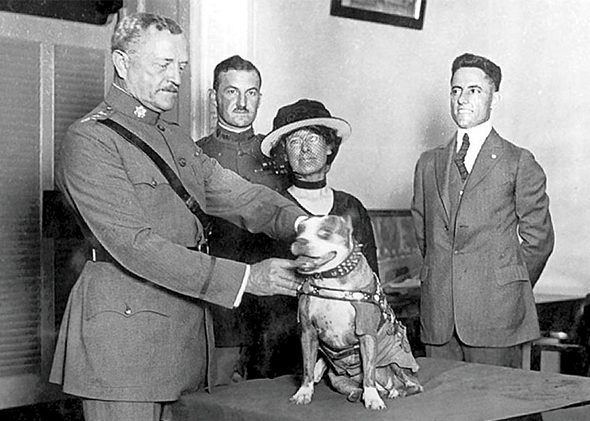 With the war winding down, Sgt. Stubby was wounded again in the chest and leg by a grenade. The patriotic pooch was heading home a hero; he was personally presented a Humane Society gold medal by General “Black Jack” Pershing, commander of the American Expeditionary Force.

Back in the U.S., he appeared in one victory parade after another with the modesty you would expect from a true hero. He even met the Commander-in-Chief himself, President Woodrow Wilson, giving his now famous salute. (He later met Presidents Harding and Coolidge as well.) 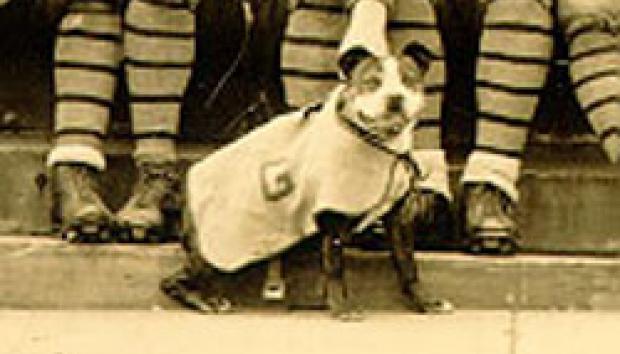 Conroy kept the dog and treated him like a VIP. When Conroy entered Georgetown University to study law in 1921, Sgt. Stubby became the school’s unofficial but very popular mascot, often making half-time appearances at home football games. Sometimes he pushed a ball around the gridiron with his nose to the cheering delight of fans. (Sgt. Stubby clearly loved the limelight.)

He was about 10 years-old when the dog who had been in so much combat died peacefully in his sleep in 1926. The New York Times ran a half-page obituary, nearly twice the space given to the passing of foreign heads of state. 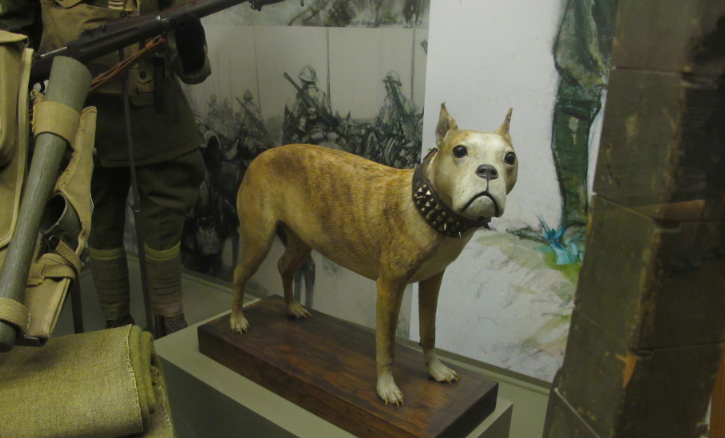 Conroy had the remains preserved and donated them to the Smithsonian in 1956. You can still see him in the Price of Freedom exhibit there. There’s also a brick bearing his name in Kansas City’s Walk of Honor.

A new generation of Americans will soon learn of the little dog’s heroism. Sgt. Stubby: An American Hero, an animated feature-length film, is schedule for release in 2018. 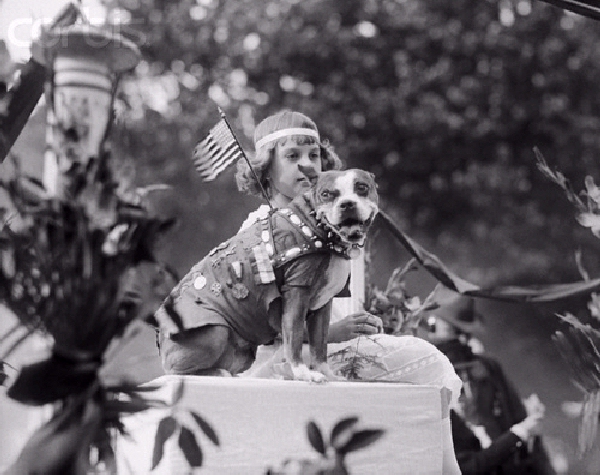 In his own way, Sgt. Stubby exemplified a canine version of the American Spirit. He was a mutt from an undistinguished background, plain but loyal, ready to tackle every challenge that confronted him, and to overcome them all. In my book, it doesn’t get any more American than that.