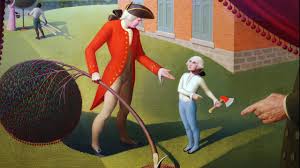 Keeping all of February’s presidential birthdays straight is a big headache. Ronald Reagan was born on February 6. William Henry Harrison on the 9. Lincoln arrived on the 12th. And president Numero Uno, George Washington, was born February 22. Congress washed its hands of the mess by lumping them all together in the Presidents Day holiday.

Chances are you grew up hearing George Washington chopped down a cherry tree as a 6 year-old-boy. When his dad asked who was responsible, the future Father of Our Country ‘fessed up and said, “I cannot tell a lie, I did it with my little hatchet.” It’s a story that inspired countless generations of kids to always tell the truth.

Yet it never happened.

That’s right, the tale extolling the virtues of honesty is a lie. And get this—it was even spun by a man of the cloth! Here’s the story.

Back in our country’s infancy, early Americans hungered for heroes. We’d just broken free from Britain, so England’s history no longer appealed on this side of the pond.

George Washington perfectly fit the bill. He had held the Continental Army together by sheer force of will, saving the Patriot cause along with it. Tall and imposing, he looked and acted like a successful general. He added to his reputation by getting one of the world’s first republics since ancient Rome up and running. Then, most astonishingly of all, at the very summit of his career when he could have been anything he wanted—king, emperor, or dictator—he did the unthinkable: he walked away from power and went home. In doing so, he left a legacy that’s still practiced nearly 225 years later.

But all that wasn’t good enough for Parson Weems. 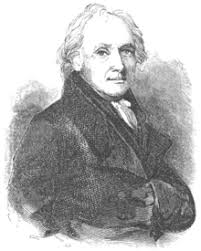 To say Mason Locke Weems was a fan of George Washington is an understatement. His adoration for the first president bordered on obsession. He was, in modern sports terms, a Super Fan.

Born and raised in Maryland, Weems was ordained in the Protestant Episcopal Church just after the Revolution. Needing a sideline to supplement is meager income, he first sold and then wrote books. He eventually settled as pastor of a parish in Lorton, Virginia, not far from Washington’s home. Weems later padded his resume by claiming he had served as rector of the Mount Vernon parish, which wasn’t true.

After Washington’s death in December 1799, people craved information about that remarkable man’s life. So Parson Weems happily filled the void. Unfortunately, he couldn’t resist the temptation to make a good story better. Like a fisherman’s yarn about the one that got away, his tales kept getting bigger and bigger. His crowning jewel was the cherry tree incident, which he claimed to have heard from an elderly woman who had known the young Washington’s family. 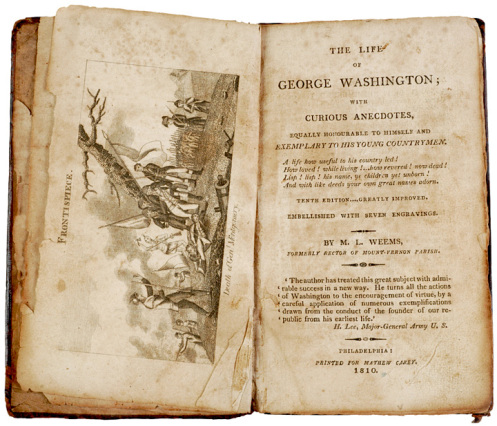 Young George, his little hatchet, the downed cherry tree, and the famous “I cannot tell a lie” line first appeared in the fifth edition of Weems’ book, The Life of George Washington. The passage was a show-stealer. It was the part everyone talked about. So much so, other writers accepted it as fact and included it in their Washington biographies. Even the legendary McGuffey Reader passed it on to countless students for decades.

By the end of the 19th Century, historians began expressing doubts. Woodrow Wilson’s 1896 Washington biography came right out and called the tale a fabrication. There has been exhaustive research into it ever since, and the most charitable conclusion that can be drawn is there’s no way of proving whether it happened. Which is a far cry from saying it did.

I’m a traditionalist and am usually inclined to give questionable historic incidents the benefit of the doubt. But not this time. Parson Weems seems to have had a very casual relationship with honesty. He wrote several books about America’s early leaders and stretched the truth in all of them. Like, a lot. 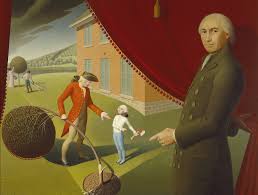 So go ahead and eat a cherry pie George’s birthday next February if you wish. Because regardless of what may or may not have happened when Washington was a child, one thing is certain: I swear cherry pies are delicious. I cannot tell a lie.