THE SMOOCH HEARD ROUND THE WORLD

We’ve all done something impulsive at one time or another. A spur of the moment decision that, when you thought about it later, wasn’t such a good idea. Nearly 90 years ago an American woman acted rashly, and her action involved history’s worst monster. Here’s the story of the woman who kissed Hitler.

In many ways, George and Carla De Vries were typical American tourists vacationing in Europe. The Norwalk, California dairy farmers did what many of their countrymen did that year and seized on the upcoming Summer Olympic Games as the perfect opportunity to see the Continent. 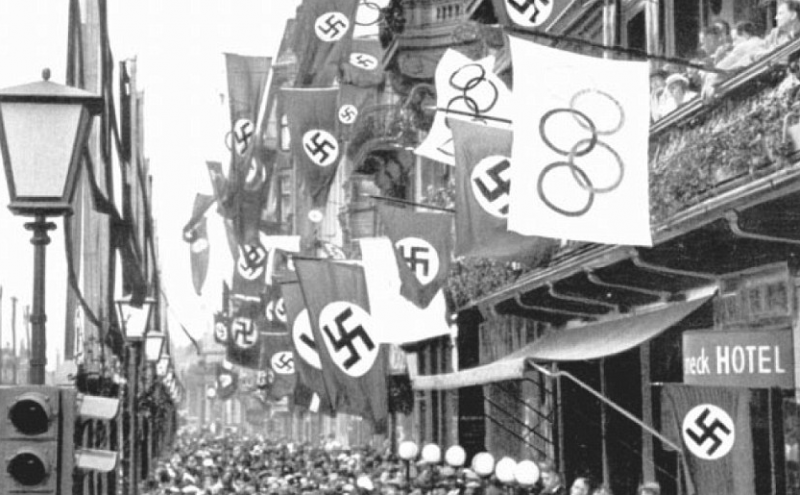 But this wasn’t any ordinary Olympiad. Because the 1936 Games were held in Berlin, capital of Nazi Germany. The swastika flew above Olympic Stadium. And hovering over it all was the official host, Adolf Hitler.

In fairness to the de Vries, at that particular moment Hitler seemed like just another bad guy to many people. A really bad guy, perhaps. But there were plenty of them in Europe at that time. Stalin, Mussolini, Franco, and lots of lesser tyrants as well. The Third Reich’s worst horrors were yet to come. World War II and the Holocaust were still several years away. The Nazis were on their best behavior just then, too. They toned down their hate-filled rhetoric, plastered fake smiles on their faces, and built shiny massive venues to host athletic competitions. The Reich’s leaders hoped to use the games to showcase their racial superiority claptrap, though that didn’t turn out as they had planned. 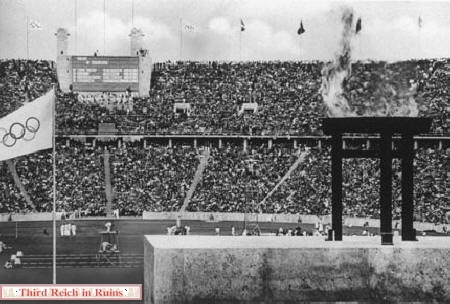 George and Carla were among the large crowd (estimates are as high as 30,000 people) watching swimming contests on August 15. Hitler had a ringside seat. The men’s 1500m freestyle event had just wrapped up. Carla asked guards if Der Fuhrer would autograph her Olympic ticket. During a break in the action, she was escorted to his seat.

Hitler seemed to be having one of his rare pleasant days. Carla handed him the ticket, which he obligingly signed and returned.

Then an idea popped into her head and she pounced. Literally. The 40-year-old lunged over the railing and tried to kiss the dictator. Hitler pulled back, grinning from ear to ear like an awkward schoolboy.

Security guards grabbed Carla. As they led her off, thousands of people who witnessed the scene cheered wildly. “I think we’d better get out of here,” she told George, who agreed. They lost no time returning to their hotel. Carla had, after all, just made people laugh at the one person in Nazi Germany you didn’t make fun of.

Back at his palatial office inside the Reich Chancellery later that day, Hitler was furious. How could his SS bodyguards have failed so terribly? What if the woman had lunged at him with a gun, or a grenade, or a knife? It had been a major security lapse. There was a huge shakeup in Hitler’s detail. Some officers were fired, others demoted.

The moment was caught on film. But the Nazis censored it, preventing most Germans from learning what had happened. Yet, the Olympics is an international gathering after all and stories about it ran in newspapers around the world, including The New York Times.

Why did Carla do it? As she said afterward, “It’s just that I’m a woman of impulses, I guess … I don’t know why I did it. Certainly, I hadn’t planned such a thing.”

The 1936 Olympics wasn’t Carla’s only brush with fame. She was in the news later for preventing a patient in a mental institution from committing suicide, and again when her husband’s dairy dealt with a labor strike.

Still, there was one moment in her life she was asked about over and over. “Come on, Grandma, tell us about the time you kissed Hitler.” She went right on telling the tale until her death in 1985 at age 92. It was a tale, however, no one envied. 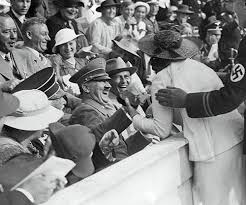 The censored film clip surfaced a few years ago. Although the affair lasted less than ten seconds, it shows the man who brought misery to millions made to squirm. There is a small measure of retribution in that.