WHO WAS MAYBERRY’S MYSTERY MAN?

I begin this week’s column with a confession. I’m a lifelong, dyed in the wool fan of The Andy Griffith Show. It debuted just a few weeks before I was born, I grew up watching it in prime time, and I’ve religiously followed it in reruns for decades. Andy and Barney, Opie and Aunt Bee, Floyd and Otis, and the whole gang feel like extended family. I belong to several Facebook fan groups where members vigorously debate the merits of their favorite characters and argue over who should and shouldn’t have been Andy’s girlfriend. (Helen Crump? Seriously?)

The show has attained a kind of cult status. Multiple books have been written about it, college courses have been taught on it, and we aging Baby Boomers secretly yearn to spend our golden years in a friendly little town just like Mayberry where people are nice, where right always triumphs over wrong, and where the home cookin’ is, in Andy Taylor’s words, “extry gooo-oood!”

Given all that adoring attention, you may be surprised to learn a big mystery from the program remains unsolved more than 50 years later. Who played the mysterious Mr. Schwamp? 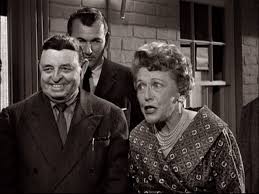 Who? It’s easy to not remember him. Although he appeared in over two dozen episodes, both black and white and color, he never spoke a single word. Not even once, although Andy and Barney frequently refer to him by name as “Old Man Schwamp.” Or Schwump, if you prefer. We don’t know the correct spelling because the character is never listed in the show’s credits. In fact, nobody even knows the name of the round-faced actor of a certain age who portrayed him. He smiles in acknowledgment of his name from time to time, but that’s all.

There’s a rumor among some fan

s that the actor was a personal friend of Andy Griffith who had fallen on hard times. He was given a small walk-on role with only a few lines as an act of charity. Supposedly, according to this uncorroborated version, the actor forgot his lines and froze. So Andy filmed the scene without him speaking. That supposedly amused the show’s star, who got a kick out of it when he saw the finished product. So Griffith had the writers insert brief, passing scenes with Old Man Schwamp from then on. (When your name is in the show’s title, you can get away with things like that.)

Mr. Schwamp appears at a Mayberry stag dance, watches Ernest T. Bass throw a rock through a window, and of course passes time on a sidewalk bench outside the courthouse. He also pops up in a few episodes of the spinoffs Gomer Pyle, USMC and Mayberry RFD. Always without speaking, and never mentioned in the closing credits. He remains the one complete mystery from a TV program millions of Americans know inside and out.

A few years ago, someone posted on YouTube a home movie taken by Ron Howard’s father of a behind the scenes glimpse of The Andy Griffith Show set. In the background, standing among the crew, a gentleman is seen reading a newspaper who bears a strong resemblance to the mystery man. Could he had been part of the production team, and the whole thing was just an elaborate inside joke? Probably. I agree with that theory.

Why does it matter, you ask. In the great scheme of things it doesn’t. But we humans love pondering the unanswerable. Americans have spent 82 years wondering what became of Amelia Earhart, after all. 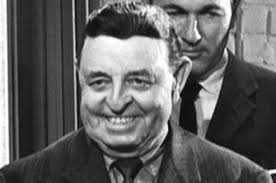 And so Old Man Schwamp stares back at us from a half century old spool of celluloid. The chubby face grins and his eyes twinkle. He clearly enjoys knowing what we don’t know, and probably never will.

29 thoughts on “The Mysterious Mr. Schwamp”